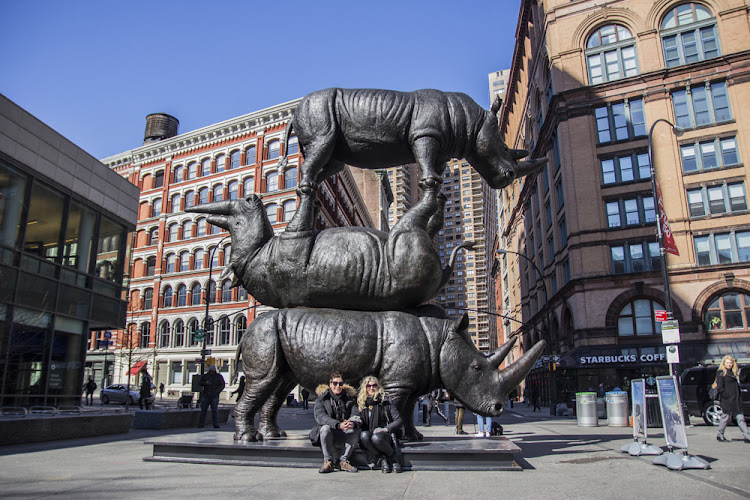 A massive bronze sculpture entitled “The Last Three” has gone on display in New York City‚ a sombre memorial to the impending demise of Africa’s last three Northern White Rhinos.

The unveiling has also sparked a social media row after art critic Jerry Saltz panned the sculpture as a “mad ugly” and “kitsch monstrosity”‚ though many others rallied to the artists’ defence and praised their attempts to raise global awareness about the plight of the world’s imperilled rhinos.

The 5m-high sculpture depicts the last Northern White Rhinos‚ three closely-related zoo survivors that were taken to the Ol Pejeta private sanctuary in Kenya in 2009 as part of a last-ditch attempt to resuscitate a rhino sub-species that is now extinct in the wild.

Closely-related to South Africa’s more numerous Southern White Rhino that almost became extinct more than a century ago‚ the Northern White Rhino used to live in Sudan‚ Uganda‚ Central African Republic and the DRC‚ but the last wild northern rhinos are thought to have been shot by poachers 12 years ago.

Now the last captive male‚ a 45 year-old bull named Sudan‚ is in poor health. Earlier this month there were fears that the bull was about to die because of a severe leg infection. Though Sudan has since rallied somewhat‚ it seems unlikely that bull can survive much longer at such an advanced age.