Often described as the happiest Christian holiday, Easter celebrates the resurrection of Jesus from the tomb on the third day after his crucifixion.

The Easter egg is certainly one of the most familiar symbols of Easter. A symbol with a long pre-Christian history, the egg is known to have represented a new life, fertility and rebirth in many cultures. The symbol is also linked to pagan traditions celebrating the arrival of spring after a cold winter. In Christianity, Easter eggs represent Jesus’ emergence from the tomb and resurrection.

The Easter Bunny is another familiar symbol of the holiday. Although the Bible does not mention a rabbit delivering eggs, it became a prominent symbol, yet the exact reasons for this are unclear. One theory is that the symbol of the rabbit has its roots in the pagan tradition, specifically the festival of Eostre—a goddess of fertility whose animal symbol was a bunny. In addition, known to be prolific procreators, rabbits have also been seen as a symbol of fertility and new life.

In order to celebrate Easter, we bring you some artworks that feature these motifs that you can own right now! 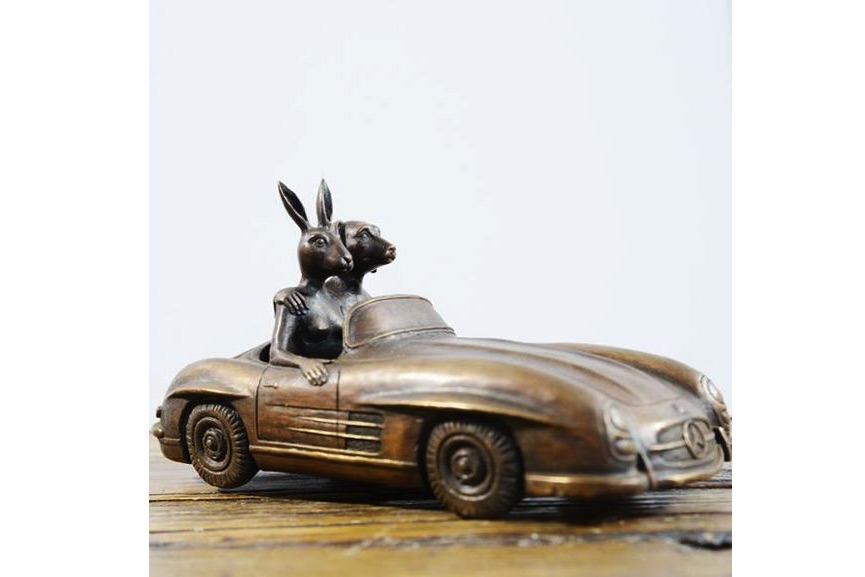 Partners in life and art, Gillie and Marc have been working together for almost three decades. Two people working as one and with a single vision, the duo is known for works spreading the message of love and conservation around. Passionate eco-warriors, they have a deep respect for the close spiritual bond between humans and animals.

Although the couple often addresses serious themes, this beautiful sculpture showcases the brighter side of their sensibilities. Carved in bronze, this fun piece features a rabbit and a dog driving a car carefree.